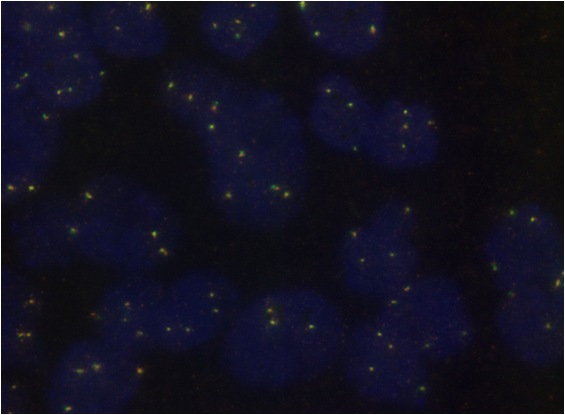 oncoFISH ALK is a fully automated microscopy application for the FISH based detection of rearrangements of the gene encoding anaplastic lymphoma kinase (ALK). Rearrangements of the gene encoding anaplastic lymphoma kinase (ALK) have been linked to abnormal cell proliferation and Non-small cell lung carcinoma (NSCLC) NSCLC accounts for about 85% of lung cancers and approximately 3-5% of non-small cell lung carcinomas have a rearrangement of the ALK gene on chromosome 2, resulting in fusion between ALK and another gene, ALK activation, impaired apoptosis, and abnormal cell proliferation. The most common ALK rearrangement in NSCLC is EML4-ALK, Patients with ALK rearrangements are younger than most patients with NSCLC and EML4-ALK rearrangements are more common in adenocarcinomas of light smokers or those who have never smoked.
Depending on medical status and stage of disease, treatment options include surgery, radiation therapy, and chemotherapy. Although cytotoxic chemotherapy remains an important part of treatment, targeted therapies based on genetic alterations in the tumor are now considered appropriate for selected cases. Thus, the identification of mutations in oncogenes associated with non-squamous NSCLC can help determine which patients are more likely to benefit from a targeted therapy. Patients with such tumors have been shown to respond to the ALK kinase inhibitor crizotinib and recent studies have demonstrated that the determination of the presence of ALK gene rearrangements helps treating physicians select more effective therapies for patients with NSCLC. Crizotinib, the first FDA-approved ALK tyrosine kinase inhibitor, is indicated for treatment of locally advanced or metastatic NSCLC in patients with tumors harboring ALK mutations and patients with ALK-positive advanced NSCLC have exhibited objective response rates of 50% to 61% in single-arm clinical studies.
There is a need for a companion diagnostic test to identify patients with ALK rearrangements who may be considered for therapy targeting the constitutively activated receptor tyrosine kinase that results from EML4-ALK and other ALK fusions. FISH is particularly well suited to detecting the spectrum of variants of ALK rearrangements. The ALK gene has more than 20 known rearrangement partner genes, with 15 variants of the most common EML4-ALK fusion, which arises from fusion between the 5? end of the EML4 gene and the 3? end of the ALK gene on chromosome 2p23. While molecular assays must be designed to individual and unique fusions, FISH detection encompasses all described and even as-yet undescribed rearrangements.
oncoFISH ALK utilizes break-apart probe-sets to detect all ALK gene rearrangements. This fully-automated FISH test provides a high level of sensitivity and reduces the subjectivity often associated with FISH-based assays. True walk-away functionality reduces operator attended time, whilst providing images of all clinically important cells for review and confirmation. This automated test delivers comprehensive, accurate results with the fast turn-around time required for such a companion diagnostic. 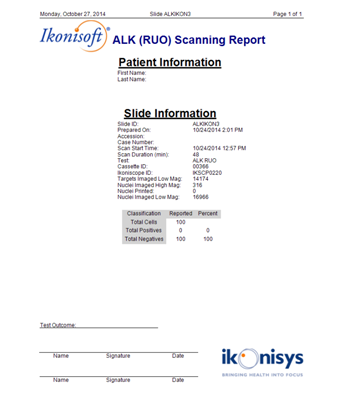